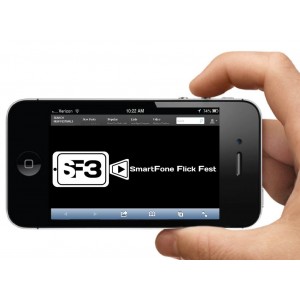 I AM SF3 - SmartFone Flick Fest

Open to filmmakers of all ages from first-time filmmakers to professionals. As long as your film is shot entirely on a smartphone or tablet and is within the six and a half minute time limit your film is eligible for submission. Everyone has a great idea for a short film and a potential movie camera in their pocket, so no excuses. Here’s your chance to start filming!

Ten films will be selected from all the entries to screen at our Gala Finals Event at the Chauvel Cinema in Sydney, Australia on August 24, 2017. The night starts with a VIP Meet and Greet Event which is a chance for all SF3 2017 filmmakers, creatives, actors, sponsors and judges to mingle with industry professionals and each other. The SF3 Top Ten Films will then be screened on the beautiful big screen of the iconic and historic Chauvel Cinema and a panel of esteemed judges will award the SF3 Prizes to category winners, including the top prizes of SF3 2017 Best Film and SF3 2017 People's Choice Award. Although awarded on the night, the People's Choice Award is open for online voting for two days prior to the Gala Finals Event. All other prizes are awarded by our judging panel.

Many of our past Top Ten and shortlisted films have been invited to screen around the world at our partner film festivals including the International Mobil Film Festival in San Diego, the Syria Mobile Film Festival and more. The opportunities are endless for smartphone filmmakers. All films MUST be shot entirely on a smartphone or tablet and must not exceed 6.5 minutes (including credits). You can use any editing software, apps and phone additions, and you can edit on a PC, laptop or your phone.ull your phone out of your pocket and start filming, it really is that easy!

That phone in your pocket is a potential movie camera, so get creating.

Rules: Your film must be shot entirely on a smartphone or tablet, it must be 6.5 minutes or under and it must be legal. You can edit on any device and also use any additional devices such as tripods, lenses, lighting or audio equipment.

The rules are simple:
1. The film must be shot entirely on a smartphone or tablet.
2. Films must be no longer than 6 minutes and 30 seconds including titles and credits.
3. All scripts and ideas must be your original material.
4. Copyright material can only be used if you have written permission to do so.
5. You can use any software to edit your video and audio.
6 You can use any software for colour correction or special effects.
7. You can use external microphones, wide-angle lenses, lighting, tripods, etc.
8. Your film must meet all the terms and conditions of the festival to be eligible.

Check out our site for full T&C's - www.sf3.com.au

Check out our site for full T&C's - www.sf3.com.au