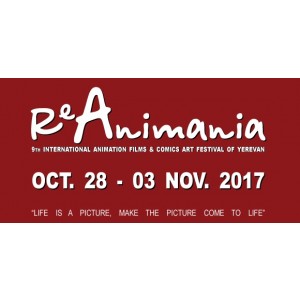 ReAnimania International Animation Film Festival of Yerevan was founded by cartoonist, painter and animator Vrej Kassouny in 2008.
Armenia’s history in animation had begun 70 years prior, with the release of the first Armenian film, Lev Atamanov’s (né Levon Atamanyan) The Dog and the Cat in 1938.

In striving to honor the craft in both spirit and in name, the Festival has since reintroduced the art of animated filmmaking to Armenian audiences.

The festival includes a selection of highly anticipated non-commercial features and shorts with 15 in-competition and non-competition programs and a Market Forum for Animation Professionals (MARANI). The festival also offers an array of practical workshops, seminars, master classes and lectures presented by a host of global industry talent.

The festival has become a platform for development and promotion even beyond Armenia’s borders. As the largest event in the South Caucasus (and the most unique within its class), ReAnimania is playing an integral role in bridging east and west. It is becoming one of the most important emerging festivals, receiving over a thousand film submissions and attracting tens of thousands from around the world. In its 8th edition, ReAnimania is already becoming one of the most important young animation film festivals from all over the world, welcoming competitors, visitors and animation lovers from more than 75 countries.

Since the festival’s 2009 launch, Reanimania has welcomed roughly:

Among the world famous animation productions screen at ReAnimanian as Yerevan Premiere were: Cheating (Bill Plymton), Secret of Kells (Tomm Moore), Sita Sings the Blues (Nina Paley), Waltz with Bashir (Ari Folman), The Boy and the World (Ale Abreu), Rocks in my Pocket (Signe Baumane), Jack and the Cuckoo Clock Heart (Stephane Berla) and many others.

ReAnimania’s aim is to expand and extend the border of Armenia through the Art of Animation and Animated films.

ReAnimania’s motto is: “Life is a Picture, Make the Picture Come to life.”. .