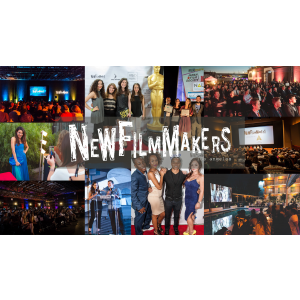 I AM NewFilmmakers Los Angeles (NFMLA)

NewFilmmakers Los Angeles (NFMLA) is a monthly screening festival for features, shorts, docs, new media, Los Angeles local filmmakers, and everything else in between. NFMLA is designed to showcase innovative works by emerging filmmakers from around the world, providing the Los Angeles community, various press outlets, and cinema fans with a constant stream of stunning cinema. NFMLA invites emerging filmmaking talents from around the world to network with respected industry professionals, showcased filmmakers, and their audiences in the heart of the entertainment industry: Los Angeles.

Each screening at NFMLA is followed by a Q&A that directly connects directors with inquisitive and impassioned film lovers, resulting in countless opportunities for dynamic discussion. The monthly festival format allows the festival to dedicate time and attention to the each of the films selected by curating ten to fifteen films per event. The festival is dedicated to giving each filmmaker the spotlight they deserve with press attention to match.

All filmmakers selected for the festival are guaranteed coverage from media outlets, such as MovieMaker Magazine, which has been a partner with NFMLA for over eight years. Selected filmmakers will participate in an on-camera interview in partnership with MovieMaker Magazine to discuss their film from inspiration to production to distribution.

NFMLA has screened over 2,500 films from 73 countries, highlighting local and international talent that have gone on to win awards everywhere from Sundance to the Oscars and had their work picked up for distribution or new works created by companies such as Fox Searchlight, Disney, The Weinstein Company, Focus Features, PBS, HBO, Showtime, MTV, and more.

Thanks to strong partnerships with DreamWorks, the Academy of Motion Picture Arts and Sciences (AMPAS), Sony Pictures, Comcast-NBCUniversal, HBO, the Hollywood Foreign Press Association (HFPA), Film LA, SAG-AFTRA, and the South Park Center, NFMLA is proud to offer more than $60,000 USD in prizes, each year -- including $3,500 in cash awards. With a slew of red-carpet screenings, and with a special after-party that seamlessly integrates Hollywood pros with up-and-coming talents, NFMLA offers an unforgettable festival experience that helps kick start the careers of emerging filmmakers. . .

Best of NFMLA Awards — Each year, NFMLA presents awards for the best films shown in the previous year’s film monthly festivals at an exclusive gala event. By screening in the Monthly Film Festival, your film is automatically in the running to be nominated for the annual awards..