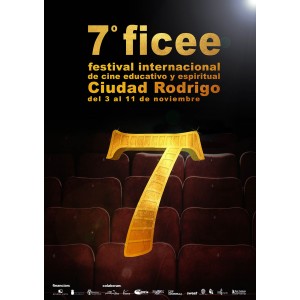 The IFESC is the first festival of educational and spiritual cinema in Spain. It is carried out in Ciudad Rodrigo, a beautiful historic town which is located between the university city of Salamanca and Portugal.

The city, which is a head area, has got lots of different spaces for displaying. These spaces are a gem and a mark-up. In this case we refer to palaces and monuments in which films can be screened.

Purpose:
The aim of the IFESC is to popularize educational and spirutual cinema which is made all around the world. A forum of ideas and opportunities in which there could be included the bases for a good educative audiovisual will be created.

Objetives:
I. To maximize the showing and distribution of independent, infant, educational, spiritual and religious products.

II. To promote the use of cinema as a didactic element. In fact, cinema has got multiple possibilities for children’s development.

III. To stimulate a context of dialogue between Church and the worldwide cinema in relation to the human values and, above all, the spiritual ones.

IV. To make an intercultural dialogue both between civilizations and inter-religiously.

V. To create a forum where films and children’s projects which are educational, imaginative and rich in human values are included.

VI. To favor the interchange with other festivals all around the world, especially with the Italian ones.

VII. To work in the creation of exhibition places of Spain, which are related to Church or other institutions for making easier the distribution of quality films.

IX. The international promotion of the region of Ciudad Rodrigo.. .

1.- FICEE 7th - International Educative and Spiritual Film Festival of Ciudad Rodrigo aims to broadcast artistic category movies with educational, spiritual and value messages. FICEE 7th also contains the promotion and development of activities towards the creation of audiovisual products of educational, spiritual and value character, as the promotion and formation of technique and artistic professionals in production and distribution of value audiovisual products.

FICEE 7th Edition will be held from November 3th to November 11th, 2017

2.- SECTIONS are established in the following parts:

This section includes full-length films and short films in forms of fiction, documentary or animation produced after January 1st, 2015 from any nationality.

Films in fiction feature film format, short fiction, animation or documentary may be eligible for this award.

The films and / or people who choose this section must prove that they are from Castilla y León.

All the films participating in the different sections will be showed in O.V. and those which are not in Spanish MUST SHOW SPANISH SUBTITLES INCLUDING THE SELECTION COPIES.

The registration form must be completed on the FICEE website (www.ficee.es) before May 31st 2017. It includes all the different categories.

Also, the registration form must be sent to the FICEE office before the date given above with the following documentation:

• Uncut copy of the definitive version in DVD PAL ZONE 2 format with Spanish subtitles just in case the original version has been recorded in another language.

• The registration form filled out and signed.

• 3 pictures from the film in digital format with a resolution of at least 300 dpi.

• A short storyline from the film. (Maximum 8 lines)

A properly filled registration form be needed to be selected in anyone of the different competitive sections from the Festival. All the requirements must be sent in on time, otherwise films could be excluded from the selection process.

Similarly, films can be submitted through , FESTHOME platform before May 31st, 2017.

Films that aim to the selected must be sent through one of the following ways:

A- Online, for every film submitted before in FESTHOME.

B- By post to the headquarters of the FESTIVAL:

DVD's sent for pre-selection will not be returned unless requested specifically within one month from the date of completion of the Festival. Shipping charges will not be paid in any case by the FICEE Organization.

Films will be adjusted to the following clauses:

a) For the selection process: A DVD, a technical-artistic file, pictures from the film and director and finally the presentation of the Original Registration Form properly filled out and signed must be sent before May 31st, 2017.

b) Once the film has been selected: A Film copy for projection, posters or affiches and advertising material, extracts from the film in DVD for promotion and the title of the film, length, format and value of the copy must be sent before October 11th, 2017 to:

Also the delivery of information (title of the film, number of reels, sending data, shipping way, flight number and/or air waybill number) must be sent via e-mail (info@kinemasiete.es).

c) Languages and subtitles. Films which O.V. is not in Spanish will have Spanish subtitles.
d) Shipping charges from the films taking part in the different competitive sections, Official Section and Iberian Section, from the place of issue and
vice versa shall be paid by the participant. The Festival will not pay shipping charges for other materials (posters, pictures, etc.).

e) Copies will be returned with previous request, once the Festival finishes, to the communicated address within the Registration Form unless the owner of the copy had given different written explanations before the projection date.

Festival Direction will designate the judges from the different competitive sections, whose decisions are not subject to appeal and will not have to be justified.

Members from the different categories could award a maximum of four prizes to the same film.

Judges could award, along with the official awards, special mentions to the different sections.

Awards from all the categories could be declared void if considered by the jury.
An Audience Award, in every category in which the prize is awarded, will be given to the best graded film in function of the votes of the audience. For this, will be necessary to obtain an amount of votes superior to the minimum established for each of the sections.

FICEE Direction could be present, with opinion but without vote, in deliberations and communications from the different judges.

An International Jury compound by professionals from cinema and culture sectors will give the following awards:

Films in fiction feature film format, short fiction, animation or documentary may be eligible for this award.

Festival Organization decides the order and date of exhibition.

During the Festival, the Organization reserves the right to exhibit the selected films in every public section considered appropriate. In this respect production companies will assign the exhibition rights of the films for public exhibition without any charge.

Movies will be part of the film-library of the Festival with the Production Company’s consent and may be intended for audiovisual broadcasting without profit. In any case, Festival Organization will inform to the producers about the use made of these copies and this character will always be cultural and non-profit.

Producers and directors participating in the Fifth Edition of FICEE authorize, in presenting the registration form, the use of one or more
fragments of the film for broadcast as informative materials in any
media.

Once the selection of a film by the Festival is chosen for any of the different sections the film may not be withdrawn from the Festival. These conditions of participation may be complemented or modified prior to the start date of the Fifth Edition of FICEE and after notifying the parties concerned, with few other attachments the Organization deems appropriate.

The registration of a film in Fifth Edition of FICEE competition implies full acceptance and compliance with these participation rules and their annexes. The interpretation of them will be exclusive competence of the Festival. If in doubt, the Spanish version of the present Regulation is decisive.

- DVD-PAL ZONE 2 Film
- Download link for the movie or watch it online
- Artistic and technical dossier
- Registration form (completed and signed)
- Pictures in digital format from the film and director.

- One projection copy with Spanish subtitles (if the O.V. is not in Spanish) in any of the following formats: