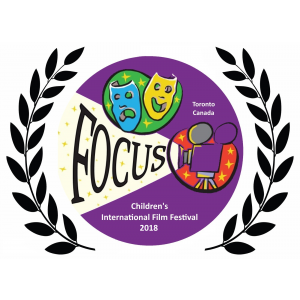 The 2018 FOCUS Children's International Film Festival screens only ANIMATED short films (cartoons) that answer the Festival theme's question: "What Does Make the World a Better Place?" We accept animated short Films MADE (CREATED AND DIRECTED) BY YOUNG AMATEUR (meaning those who doesn't get paid for their work) FILMMAKERS ONLY (younger than 16 YEARS OLD). Including opening and closing credits, Films must be less than 3 min. in length for children up to 10 years old, and less than 5 min for 11-15 year olds. The Festival is held at the York Woods Library Theatre in Toronto, Ontario, Canada on September 1, 2018. Early Bird Deadline for submissions is June 1. Final Deadline for submissions is July 10, 2018 5 pm. Eastern time Canada and USA. The earlier you submit your film, the more chances you have to be selected as a Finalist (simply because we have a quota of how many films we can include in the final screenings)! The Finalists will be announced on/or before August 1, 2017. The Winners and the Honourable Mention recipients will be chosen by an International Jury on the Day of The Festival. Audience Choice Awards will be awarded by the audience in the Theatre after the screening. Submissions are welcome from Young Filmmakers from all over the world.

Toronto is a vibrant, thriving, multicultural community with a strong tradition of support for the arts. Young Filmmakers from any country and culture are welcome to submit their Films.. .

Rules & Terms
By submitting an entry (“Film”) in the FOCUS Children's International Film Festival ("FCIFF"), entrant (“Filmmaker”) acknowledges and agrees to all the following Rules:
- A Young Filmmaker is the one who has not reached his/her 16th birthday on September 1, 2018.

- On behalf of the Filmmaker, entries must be submitted over e-mail: focusnonprofit@gmail.com by a legal Parent/Guardian of the Filmmaker and has a Release form signed and attached to it as a .pdf file.
​
- At the time of submission, a link (and a password, if required) must be provided in the same e-mail for us to view the Film (vimeo, youtube) as a part of the selection process. If selected as a Finalist, a FULL HD 1080p NTSC screening copy of the Film must be submitted for exhibition (.mov [ProRes] .mp4) via dropbox or similar file transfer provider.
​
- Theme: The competition is open to short animated Films that answer the Festival theme's question: "What Does Make the World a Better Place?"

- Film Language: Films that are not in English must be subtitled or dubbed in English.

- License to FCIFF:
Submission of Your Film gives FCIFF, FOCUS School and DASH Production Inc. permission to use segments of the Film and other submitted information, including but not limited to Filmmaker's name and Stills, for marketing, promotion, and publicity purposes.

- Filmmaker Authority: Filmmaker affirmatively states that he/she/they have the authority to, and by submitting a Film, in fact, authorize FCIFF to screen the Film without any monetary remuneration to the Filmmaker. Proceeds, if any, from the screening of the Film in front of general public will be used to cover the Festival costs at the Festival's discretion.
​
- Breach by Filmmaker: Filmmaker assumes all liability for violations of copyright, licenses, privacy laws in the state/country where the Film was shot, or made, or violations of or compliance with any agreement whatsoever.
​
- Reliance by FCIFF: FCIFF will rely upon Filmmaker’s affirmative statements made by submitting the Film relating to copyright, licenses, releases, and any agreements. Filmmaker releases FCIFF from any and all claims and liabilities with respect to publicizing, screening, or cablecasting the Film, regardless of when such claim is made or liability arises. .